Women in Film Chicago hosted the Focus Awards, our signature fundraising event, on Thursday, January 28, 2016 at ArcLight Cinema, 1500 N Clybourn Ave. Chicago, IL 60610.The mission of the Focus Awards is two-fold: to raise the necessary capital to provide quality programming, networking and mentorship opportunities for women in the advertising, film and television industries and to honor the accomplishments of the noted “superwomen” who continually put Chicago on the map.

Photos from the 2016 Focus Awards can be seen on Flickr. 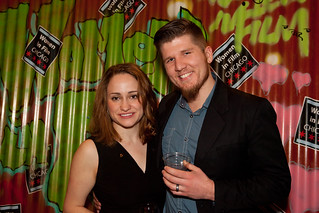 Megan Mercier is a writer, actor, director, producer, and improviser based in Los Angeles. Before moving to L.A., Mercier was Artistic Director and an Ensemble Member at the renowned theater company, The Neo-Futurists, where she wrote and performed regularly in Chicago’s longest-running late-night show, Too Much Light Makes The Baby Go Blind: 30 Plays in 60 Minutes. Other show credits with the 25-year-old company include Picked Up (2008), Crisis: A Musical Game Show (2010), Burning Bluebeard (2011), and The Miss Neo Pageant (2013), the latter of which she created and co-wrote to critical acclaim. She also acted as a producer and curator for several other events including an annual summer film fest as well as an annual Chicago Pride benefit show, which raised money for the LGBTQ Host Home Program providing alternative housing to homeless queer youth.

Megan is a graduate of Columbia College Chicago, where she was also a student in the Comedy Studies program at The Second City. She later completed the improv training program at iO Chicago where she performed with the house team, DENVER. Her Chicago career included freelance work producing The Encyclopedia Show (where she was also a contributor and cast regular), and performing original work for Write Club Chicago, 2nd Story, The Paper Machete, and The Jukebox Show. Megan appeared in several independent films including Tiger Tail in Blue, Privacy Settings, Autoerotic, Caitlin Plays Herself, Happy Christmas, and Digging For Fire. In 2011, she appeared an independent improvised pilot Shrink, which received both the Critic’s Award and Best Comedy Pilot at the 2012 NYTVF.

Jean Batthany, Named one of Business Insider’s 30 Most Creative Women in Advertising, celebrated as one of Advertising Working Mothers of the Year by AWNY and Working Mother Magazine and awarded the 3 Cheers Award at the 3% Conference NYC in 2015, Jean is currently an Executive Creative Director, EVP at DDB Chicago. Since joining the agency, she’s added Kohler and the American Cancer Society to the client list and helped launch LaunchPad, a creative internship program designed to both find and develop new talent as well as mentors.

An advocate for changing the ratio of men to women in creative leadership roles, Jean proudly sits on the Better by Half Board, a gender balance initiative from DDB North America and is a member of the Art Director Club’s 50/50 initiative. She is the proud mother of Maya and Olivia, two strong, smart, talented, teenage daughters and is engaged to playwright, director, actor Graham Brown, who manages a lot of the drama at home.

Kathryn Hempel, Editor, Partner, Vice President of Cutters Studios and Artist. Kathryn has edited award-winning commercials and films of various genres, including P&G’s internationally acclaimed Always “Like A Girl” campaign that won an Emmy for Outstanding Commercial, swept the Webby Awards, won seven CLIO Awards and numerous Pencils at the D&AD show, and 14 Cannes Lions. Her portfolio includes documentary, dialogue, comedy, narrative and visual storytelling spots for Burrell, Cramer Krasselt, DDB, Digitas, FCB, Energy BBDO, Leo Burnett, mcgarrybowen, and Saatchi & Saatchi, to name but a few. Kathryn has also edited web content, videos, shorts and long format documentaries, all influencing her ability to create and to cut to the essence of a story.

Kathryn co-wrote and edited “Road to Roubaix,” a feature length documentary about the Paris-Roubaix cycling classic in France – and directed and edited the short documentary film “Ox-Bow,” which screened at the Tribeca International Film and Video Festival.

Kathryn’s interest in film editing blends well with her art. She has created original art for commercial and independent feature film sets, and recently exhibited a 365-day art project, along with creating a book and short art film encapsulating the year of making a piece of art every day.

The creator and founder of the international Camp Kuleshov editing, design and sound competition for assistants in all AICE member companies, she is also a proud member of the Curatorial Committee for the 2015 AICE Awards and 2015 Clio Awards Film Jury for Editing in Film Technique. Kathryn lives in Oak Park with her husband, Curt Warner and their two great kids, Daisy and Lincoln.

Kris Swanberg began her film career at Southern Illinois University where she studied documentary film production. Using naturalistic techniques and often working with non-actors, Swanberg went on to focus her career in narrative film. Her first feature, It was great, but I was ready to come home played in competition at the SXSW Film Festival in 2009, followed by her next feature, Empire Builder (2012) and short film Baby Mary (2014). Unexpected, starring Cobie Smulders and Anders Holm, premiered in competition at the 2015 Sundance Film Festival and is Swanberg’s third feature.

Thank you for your support. We look forward to seeing you there!